The Settlers of Catan is a favourite of the board gaming community, often cited as a gateway into modern board gaming thanks to its simple rules, quick learning curve and engaging gameplay. Whilst the game is simple, it still has enough tactical depth to keep all sorts of casual players entertained. On the other hand, hardcore gamers may well have played so many times that they have become bored. Thankfully, there are a number of expansions such as "Traders and Barbarians" that provide enough rule variants to keep the game interesting for that little bit longer! 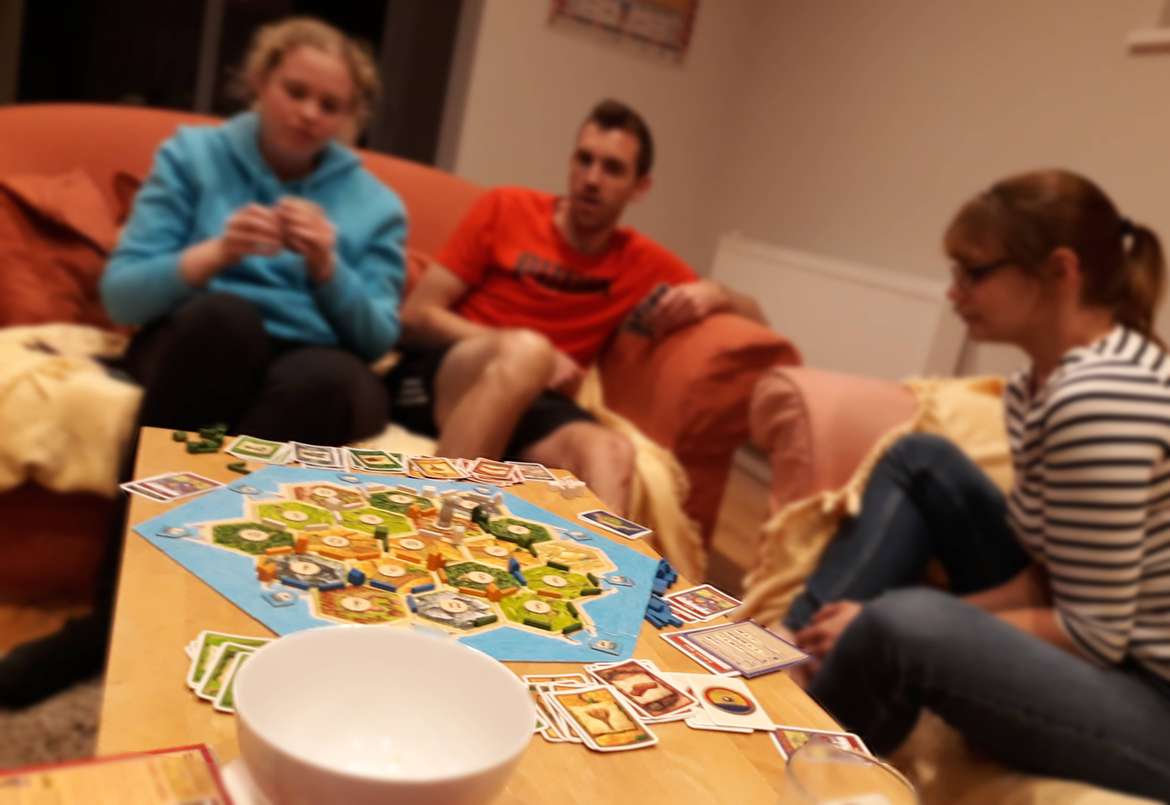 The game comes with a somewhat wordy 16-page 'Game Rules & Almanac' but thankfully, the last of those pages is a game overview and explains almost everything the players need to understand to play the game. Despite this lengthy rule book, the rules are actually very simple and can be learned in 15 to 20 minutes. If you are playing with people who have played before this will of course be even quicker.

The game is set on the island of Catan, where each of the players compete for victory points in their attempt to build the most glorious nation. The island consists of 19 terrain hexes surrounded by ocean, with each hex producing resources based on its terrain type. So pastures produce sheep, hills produce brick, mountains produce ore, fields produce grain, forests produce lumber and deserts produces nothing. Each player then builds their initial settlements on the intersections of the tiles to attempt to harvest those resources.

The numbers assigned to each of the hexes are one of the most important parts of the game - on each player's turn, two dice are thrown to determine which hexes produce resources. If your settlement is adjacent to the hex with the number thrown on it, you can collect the relevant resource. As you can see here, both red and blue players can collect wood from their forest because a six was rolled. Since numbers closer to seven are far more likely to be thrown than 2s or 12s, there is often a race to claim settlements near to the best numbers. 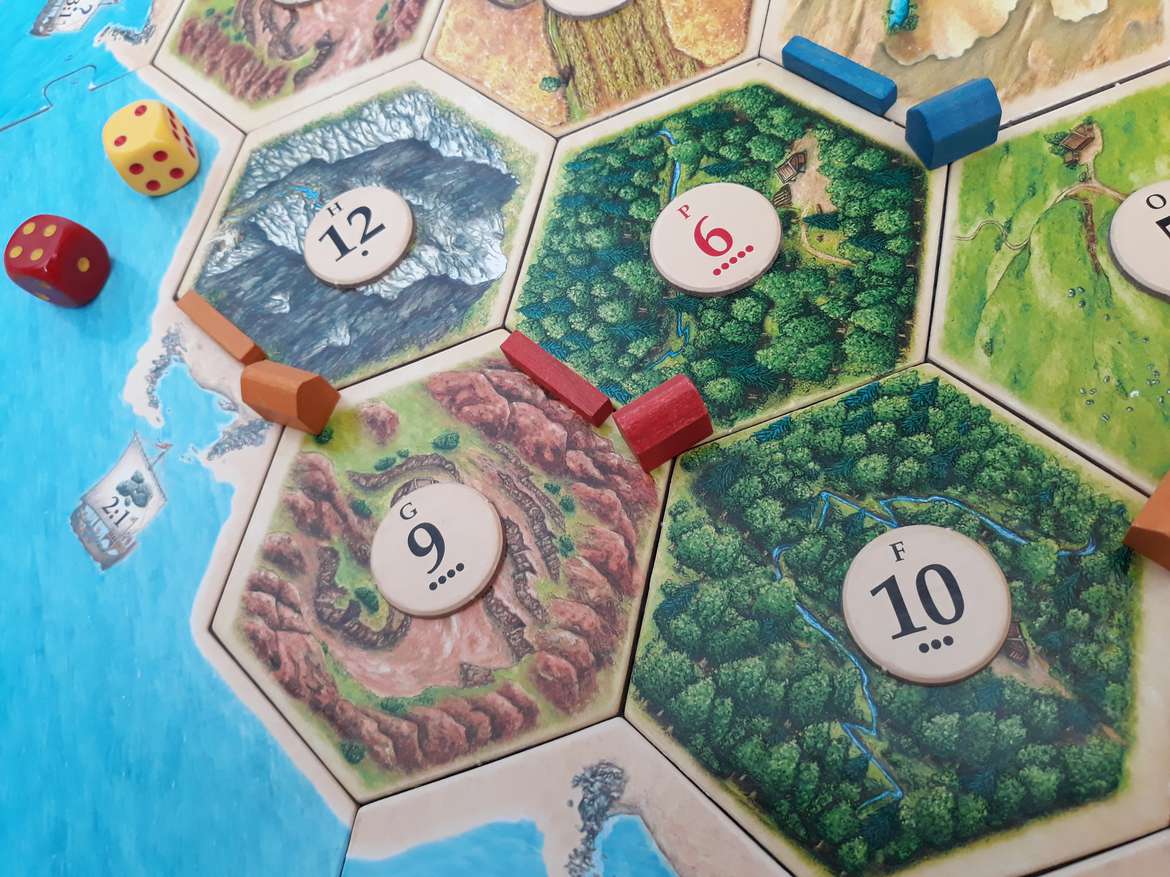 Once a player has collected a number of resources, they can then spend those to expand their nation with additional roads and settlements, or alternatively take their chances with a development card that might help them build anything from an army to a library.

Now, you may have a plentiful supply of bricks, but no wood which means you are unable to expand your settlement with roads. This is where trade comes in. With any luck, another player has a shortage of bricks and is willing to swap them for wood. You'll find that players will often refuse trade - perhaps you're competing for the same resources, the price just isn't right, or worst of all, they think you're about to win! In this case, there are two other options to attain the resources you need - either make an expensive trade at the bank, or get a better rate with ports that are connected to your settlement (in the photo above, the orange player could trade two ore for any other resource by using the port adjacent to their settlement).

The last main concept relates to the robber. The robber is a piece that can move to any tile when a 7 is rolled - the player moving the robber can choose to take a random resource from any player adjacent to the robber's tile. Perhaps more importantly, any resources that would have been produced by that hex will be blocked until the robber moves away. This can make things difficult for players taking an early lead as they are likely to be targeted by every other player trying to stop them expand. To help alleviate the problem, the player can use a knight card (one of the development cards) to move the robber to another tile - these knights form the player's army.

The game continues until one player manages to get 10 victory points - these being awarded for constructing settlements (1 point) or cities (2 points), holding the longest road (2 points), possessing the largest army (2 points) or from special development cards. Tactically the game normally breaks down into two major stages - early game, where expanding your nation with new roads and settlements is most important, and then late game, where you cash in on your resources by upgrading settlements to cities, or by buying special development cards to gain an advantage over other players.

Is this the game for me?

Catan is a great game to play with a small group of friends at home and should be equally suitable for families. Although ideally all the players will have played before, the main mechanics of the game are easy enough to understand that any new players can join in without slowing things down too much.

Depending on who you play with, there is also some scope for conflict - make sure not to get upset when your only path to the resource you needed is blocked, or when someone steals one too many resources - if you think this is likely to be a problem, you may find that a Team / Cooperative game like Pandemic could be more suitable for you.

Overall, we really enjoy the game and it's perfect for an evening with friends, as long as someone has wood.